In the UK, over 2,220 teens of driving age died, or were seriously injured, on the roads last year, seven times more than teen deaths due to drugs abuse. 71% of fatal crashes involving young drivers occur on rural roads, and are nearly four times more likely to die on those roads than the urban equivalent.

18-year-old Caitlin Huddleston was sadly one of these teens. One night, on a rural road, her car collided with a van. Neither driver was speeding, but the road was wet. Unfortunately, her inexperience behind the wheel contributed most heavily to her death.

We wanted to create a radio show that would both tell Caitlin’s story and celebrate her life. The objective was simple yet incredibly important. Alongside the AA Trust, our challenge was to raise awareness of the increased risk of driving on rural roads for inexperienced young drivers (aged 17-24).

Reaching young drivers wasn’t the problem, getting through was. For an audience most influenced by their peers, social proof would be more powerful than facts and fear, which is why telling the story of 18-year-old Caitlin held so much potential.

To help prevent future fatalities, we created Caitlin’s Hour, a radio show and campaign made to raise awareness of the hidden risks of rural roads.

This one-off, hour-long show ran nationally on the Hits Radio Network across England, Scotland and Wales, as well as on Kerrang! Radio between 2 and 3am on a Sunday. Although this seems like an odd time to run such a special radio show, it was chosen specifically as this window was identified as the most dangerous time for young and inexperienced drivers on rural roads. This meant that we had a unique opportunity to reach out and talk directly to those most at risk of an accident.

A standard sponsorship campaign just wasn’t going to cut through, nor would just a list of hard-hitting facts and figures.

We adopted a storytelling format above spots and sponsorship, in the form of an audio documentary that chronicled the tragic final hour of Caitlin’s life, narrated by her mum, best friends, and station presenters. The show featured Caitlin’s favourite songs and only introduced advice from paramedics and The AA after a personal connection to Caitlin’s story was formed. Rather than instilling fear or blame, the content raised awareness of the issues and lobbied for relevant changes in driver training.

The show was available for listen again, which was promoted via trails during the following week. 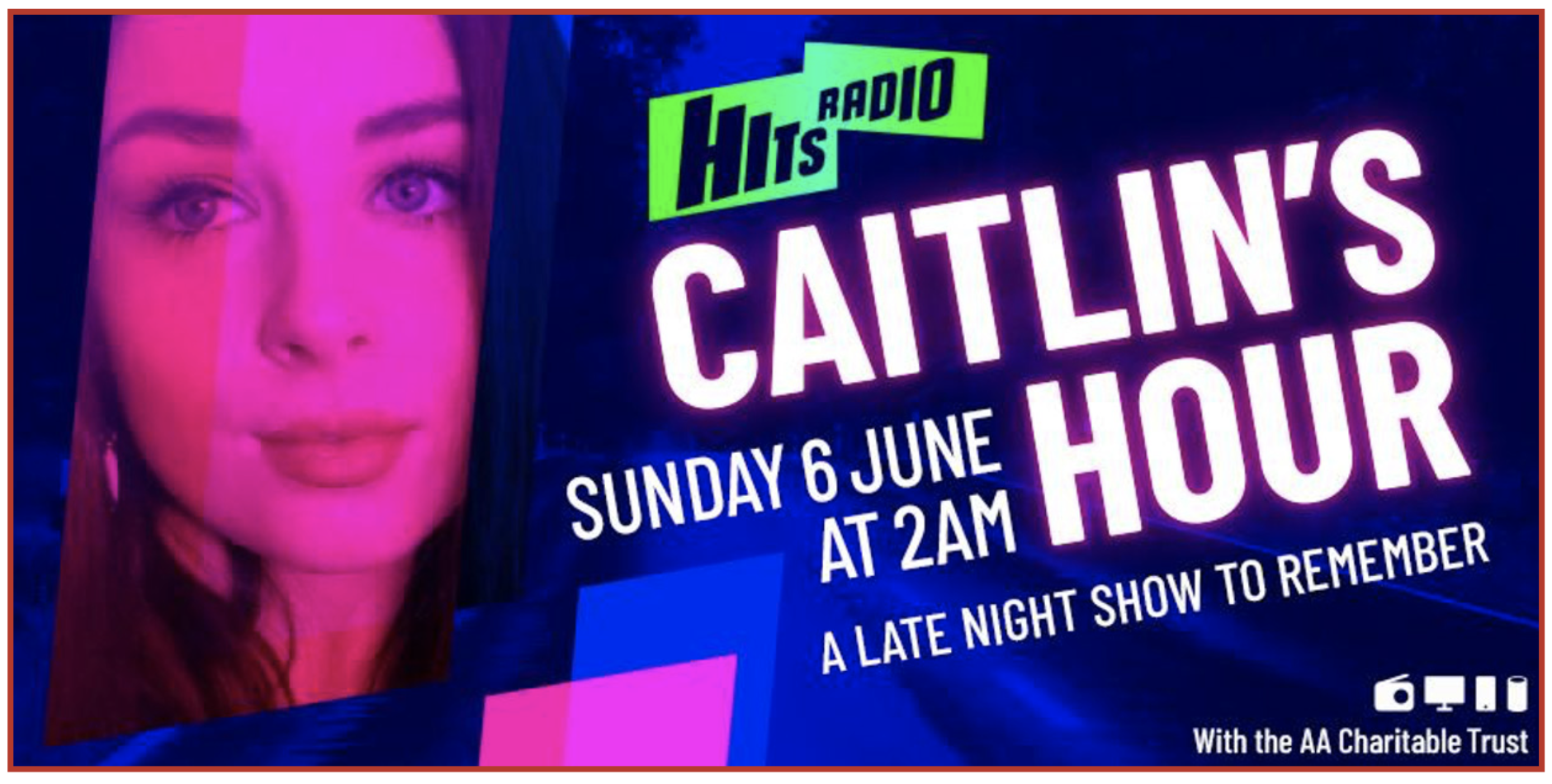 Bauer is a long-term campaigner for road safety. Working with The AA Charitable Trust provided access to analysis of over 74,000 young driver incidents which was encoded on to an interactive map on the stations’ websites, ensuring relevant coverage across accident hotspots through the Hits Network (totalling 22 stations), including the A595 where Caitlin’s collision occurred.

We also rallied support from the OOH industry, who care about road safety as much as we do. Our key partners donated over £50,000 of inventory across 300 DOOH roadside and large format sites nationally, near AA- identified accident hotspots, synched to run in tandem with Caitlin’s Hour with a ‘Live Now’ message. This included two digital 48-sheets in Barrow-in-Furness, the nearest town to Caitlin’s crash site, which featured as a seven-day tribute to her.

We significantly raised awareness, increasing the number of live listens The Hits Radio Network and Kerrang! Radio, during Caitlin’s Hour. On top of that, following the campaign, we’re helping The AA to make driving safer on rural roads, through ministerial support from DfT for launch, subsequent support on social media from Think! and working with the DVLA and driving instructors to give Caitlin’s message to new drivers on passing their test.