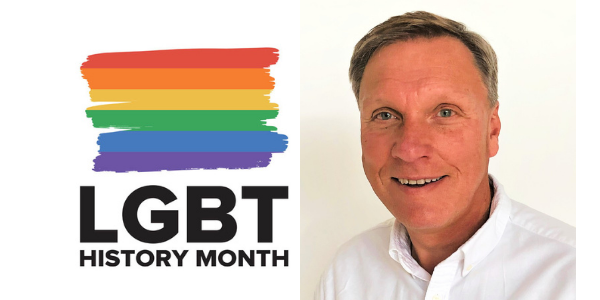 Why does LGBTQ+ History Month matter?

I’m writing this listening to the new album from Years & Years, which of course makes me think back to last year’s amazing Channel 4 drama It’s a Sin, in which Years & Years singer Olly Alexander played one of the lead characters, Ritchie. It’s a Sin, telling the story of a group of gay friends in the 1980s during the onset of HIV/AIDS, brought back lots of memories for me. I was at university when the disease first appeared in 1981 - I’m exactly the same age as Ritchie - and I remember the fear of that first decade and the stigma around both HIV and being gay at that time. Although I have friends who are HIV+ and know friends of friends who died, I was incredibly lucky that nobody close to me ever got ill, or worse. Of course HIV/AIDS is still a major issue today, although thankfully for those of us in the west it’s not the death sentence it was.

The 1980s really were a decade of fear for the LGBTQ+ community – as well as HIV, the Government had it in for us too with the introduction of Section 28 which prohibited local authorities from “promoting” homosexuality. That meant that schools were not allowed to mention the subject or support LGBTQ+ students in any way. The first march I ever went on was in Manchester in 1988 to protest against the introduction of the new law. 25,000 people attended but sadly we weren’t successful and the law lasted until 2003.

But even before the HIV era it was not easy being gay. I’d known I was gay since I was about 10, but first came out at school when I was 16 – probably not the wisest move at an all-boys school on Merseyside in 1978, but I was determined to stand up for myself and not pretend to be something I wasn’t. I didn’t know anyone else who was gay and coming out resulted in me being bullied for my last couple of years at school. Nobody supported me and I hadn’t told my parents at that stage, so there were some pretty dark moments, which only really started to lift when I “escaped” to university.

That might all sound pretty grim and I’ve faced other instances of homophobia since those times, but there have been good times too and overall I feel amazingly blessed. I have been with my wonderful husband James for the past 28 years (we got married on the London Eye) and I couldn’t be happier. Working in Bauer I feel completely accepted and that I really belong – something I couldn’t say of other organisations I’ve worked in.

But while things worked out well for me, and there has been a lot of progress over the past couple of decades both in legislation and the attitudes of society, I’m fully aware that many LGBTQ+ people still face issues of acceptance and discrimination and that there are many battles still to be won. For the past few years I’ve been a listening volunteer for Switchboard, the LGBTQ+ helpline, and that has not only allowed be to be there for others in need but has also taught me a lot about each of the different elements of the community and the issues they face, from mental health problems to coming out, from rejection by family to housing issues and from bereavement to relationship problems, or questions around transitioning. Every one of us, whether part of the LGBTQ+ community or not, is unique and every one of us deserves to be able to live our lives as we want, to love who we want to and to be treated with respect for that. The story of our community and how we got to where we are today can help us with that understanding and that is why LGBTQ+ History Month matters.

If you need information, support or a referral service for any issues around sexuality and/or gender identity, please call Switchboard on 0300 330 0630, or visit switchboard.lgbt.